Visitors in the Apple Tree

When have you last seen a European hornet (Vespa crabro) close up?

When have you last seen a European hornet (Vespa crabro) close up?

Vespa crabro is an introduced species here in the US, first reported in 1840 in New York, and the only true hornet around here:  The bald faced hornet is, in fact, a kind of yellow jacket.  A colony of European hornets will usually contain 300 or more workers, and they can forage at night, preying upon live insects as well as eating fruit.  In Germany, they are a protected species, so don’t kill one unless you have up to 50,000 Euro “auf der hohen Kante”.

At this time of year, Vespa crabro workers are thick around our apple tree in the back yard.  Beautiful insects, really, and they are 25-35mm long – that’s between 0.9 and 1.3 inches.  Quite the critter!  Thankfully, they are not aggressive, but you don’t want to step on one either. 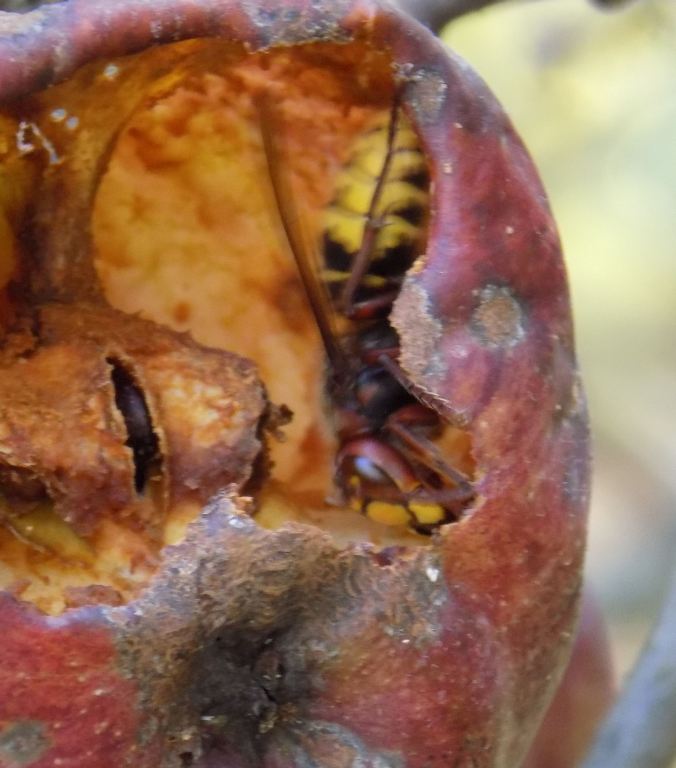 There were a few yellow jackets flying around in the apple tree at the same time, but I couldn’t get a European hornet and a yellow jacket together on one picture.  Would have been nice for a size comparison, but alas!, man kann nicht alles haben.

Here is the best “mug shot” I could get:

See how they have hollowed out the apple?  There are three of them in the same apple at the same time.

5 comments on “Visitors in the Apple Tree”