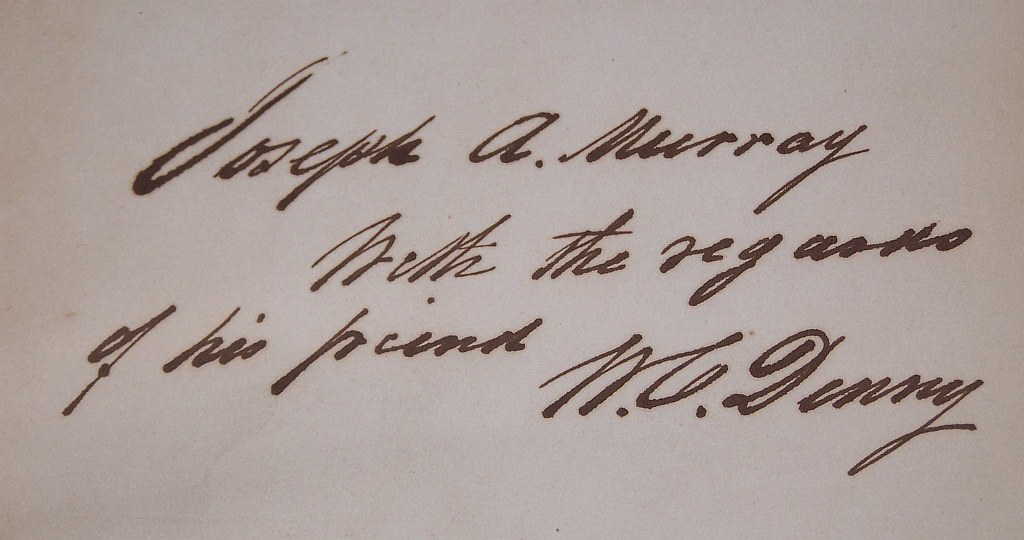 Our new little column “Remember Our Ancestors” starts out with a rather famous Denny who is not a direct ancestor of us, but a cousin: Major Ebenezer Denny.

To us, remembering our ancestors is an important thing.  After all, we would not be here without them.

So our new little column starts out with a rather famous Denny who is not a direct ancestor of us, but a cousin: Major Ebenezer Denny.

This branch of the Denny’s were among the colonial and revolutionary families of Pennsylvania.  Ebenezer Denny’s personal account of the war, published as the “Military Journal of Major Ebenezer Denny: An Officer in the Revolutionary and Indian Wars”, gives a good idea what times, and people, were like back in the day.  Here is a short, and rather lively, descriptions how he came to be a distinguished member of society in his time, peppered with quotes from his journal:

Major Ebenezer Denny, eldest child of William and Agnes (Parker) Denny, was born at Carlisle, Pennsylvania, March 11, 1761, and after an unusually eventful and useful life died at Pittsburgh, Pennsylvania, July 21, 1822, and was buried in the First Presbyterian churchyard of that city.

When the War of the Revolution began Ebenezer was but fifteen years of age, but notwithstanding his youth was a trusted messenger conveying important war messages as far west as Fort Pitt, going alone over the mountains and through the deep forests, lying on the ground at night and always on the alert for Indians, by whom he was often chased. He is described at this time as “a slender, fair, blue-eyed, red-headed boy”. His mother was a devout Christian woman who attributed the preservation of her son, amid the perils of battle on land and sea, to “a gracious and watchful Providence”, but her friends ascribed it to the fervent prayers of his godly mother.

For a little while he was in the employ of his father, but he was of a different mettle. The times were too stirring to stay at home, and learning that a privateer carrying “letters of marque and reprisal” was fitting out at Philadelphia, enlisted as a volunteer and sailed for the West Indies. He saw plenty of fighting and was always so eager and courageous that he was promoted to a command on board. Returning after the first cruise, he was intending to ship for a second, when he received a commission as ensign of the First Regiment Pennsylvania Line. This was in 1778. In August, 1780, he was transferred to the Seventh Pennsylvania, and May 23, 1781, was promoted to lieutenant of the Fourth Pennsylvania. At the time the cords were tightening around Cornwallis, Ensign Denny on the march kept a journal from which we quote. The first quotation is just after a sharp fight with the British near Williamsburg. He says:

“Here for the first time saw wounded men: the sight sickened”. As the end approached he says: “Army encamped on the banks of the James River; part of the French fleet in full view”.

On September 14, “General Washington arrived; our brigade was paraded to receive him; officers all pay their respects. He stands in the door, takes every man by the hand, the officers all pass in, receiving the salute and shake hands. This is the first time I have seen the general”.

On October 15; “Siege operations were at once commenced; the fighting became very warm on both sides and the siege works were pushed with great vigor. Easy digging, light, sandy soil. A shell from one of the French mortars, set fire to a British frigate; she burned to the waters edge and then blew up making an earthquake”.

On October 17: “Had the pleasure of seeing a drummer mount the enemy’s parapet and beat a parley; immediately an officer made his appearance holding up a white handkerchief. An officer from our line ran and met him and tied the handkerchief over his eyes, and thus was the great event of the surrender of Cornwallis accomplished.”

When the terms of the surrender had been agreed upon, October 19, 1781, Ensign Denny was detailed by Colonel Butler to plant the American colors on the surrendered ramparts, but it is related that Baron Steuben dismounted, took them from his hands and planted them himself, a procedure that only the efforts of both Washington and La Fayette prevented from leading to a hostile encounter between Colonel Butler and Baron Steuben. A little later he was with St. Clair in the Carolinas, and at Charleston during its investment and after the evacuation, but hostilities soon ceased, and the long bitter war was ended.

In the subsequent campaigns against the Indians in the west, he received his promotions, rising to the rank of major. He was with Generals Harmar, St. Clair, Clarke and Wm. Henry Harrison in their operations against the Indians, and saw plenty of action, for he was adjutant to General Harmar and aide-de-camp to General St. Clair on November 4, 1794, when St. Clair was so overwhelmed and defeated by the Indians. Major Denny was everywhere in the midst of danger and death, but escaped unharmed. He was dispatched by General St. Clair after the battle to bear the news of defeat to President Washington, who was giving a dinner at Philadelphia when the dispatch bearer arrived. At first the President asked to have the dispatches sent in to him, but Major Denny returned word that his orders were to deliver them to no one but the President, whereupon he was admitted. Washington read the entirely unexpected sad tidings, and is said to have flown into a violent passion and used words, none too mild or well chosen.

In 1794 he was commissioned a captain, in command of a detachment to protect the commissioners in laying out the town of Presque Isle (now Erie, Pennsylvania), but on arriving at Le Boeuf Point they were turned back by representative chiefs of the Six Nations who objected to having the Point occupied at that time.

During the years of 1795-96 Major Denny resided upon a farm he had bought along the Monongahela river, six miles above Pittsburgh. At this time he was a candidate for the State Assembly, but was defeated. In 1796 he was elected a commissioner of Allegheny county. At this time he sold his farm, and removed to Pittsburgh. In 1803 he was elected treasurer of Allegheny county, and was again elected in 1808. In 1804 he was appointed a director of the Branch Bank of Pennsylvania at Pittsburgh, the first bank west of the Allegheny mountains.

In the War with England, 1812-14, Major Denny was commissioner for the purchase of supplies for troops on the Erie and Niagara frontiers. He displayed his usual energy, and pushed the delivery of supplies, at a personal pecuniary loss, waived the thirty day clause in the contracts, and sent the goods forward. When Pittsburgh was incorporated a city in 1816, Major Denny was elected the first mayor. He was an earnest Presbyterian, and a trustee of the First Church of Pittsburgh, also the first president of the “Moral Society” formed in 1809. He was one of the potent forces in establishing the Western Theological School in Allegheny City, Pennsylvania. He, with pioneer Johnson, seated themselves at the doorway of the church and received the contributions of the worshippers as was the old Scotch way.

Major Denny married, July 1, 1793, Nancy Wilkins, daughter of Captain John Wilkins, soldier of the Revolution, a former resident of Carlisle, but later of Pittsburgh, Pennsylvania. Mrs. Denny died May 1, 1806, in her thirty-first year. In the summer of 1822, while on a visit with his daughter Nancy, to Niagara Falls, Major Denny was taken ill and returned with difficulty to Pittsburgh, Pennsylvania, where he died July 21, 1822, in his sixty-fifth year. Four children survived him, three sons and a daughter, the children of Nancy (Wilkins) Denny. The sons all had distinguished careers and were worthy sons of the father.

Major Denny and his wife named their sons after the high-ranking military men mentioned earlier:  Harmar, St. Clair, William Henry.  The names show up as first and middle names for a good long time in the family tree. 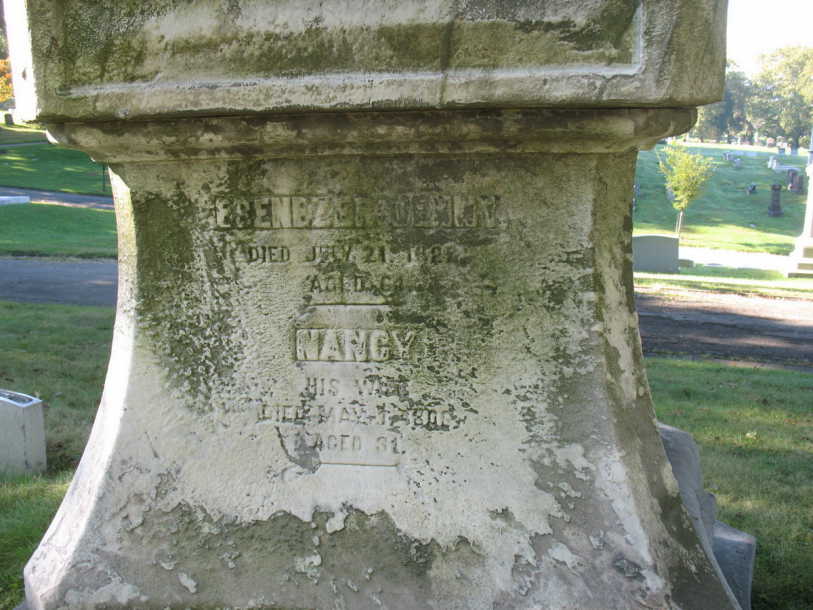 The featured image shows the dedication in our copy of Ebenezer’s war diary.  It reads “Joseph A. Murray With the regards of his friend W.C. Denny”.  Our copy was a gift, given to Joseph A Murray (1815 – 1889), who was Ebenezer’s nephew via his sister Mary Polly Denney (1778 – 1845), by William Croghan Denny (1823-1866), who was Ebenezer’s grandson via his eldest son Harmar Denny (1794 – 1852).  The copy also contains pages of handwritten notes and anecdotes concerning the family.

A note on spelling:  The last name Denney has many spellings, among the Denny and Dennehy, and within our own direct line, the spelling DennEy was adopted by those Denney’s who left Pilot Mountain, NC, around 1800 to go west into Ohio, West Virginia, Kentucky and Tennessee, while the branch of the family that stayed behind spelled themselves Denny.  Thus Ebenezer Denny’s family also spelled themselves, but even in their line, the spelling DennEy shows up on grave markers, so it is in no way consistent.