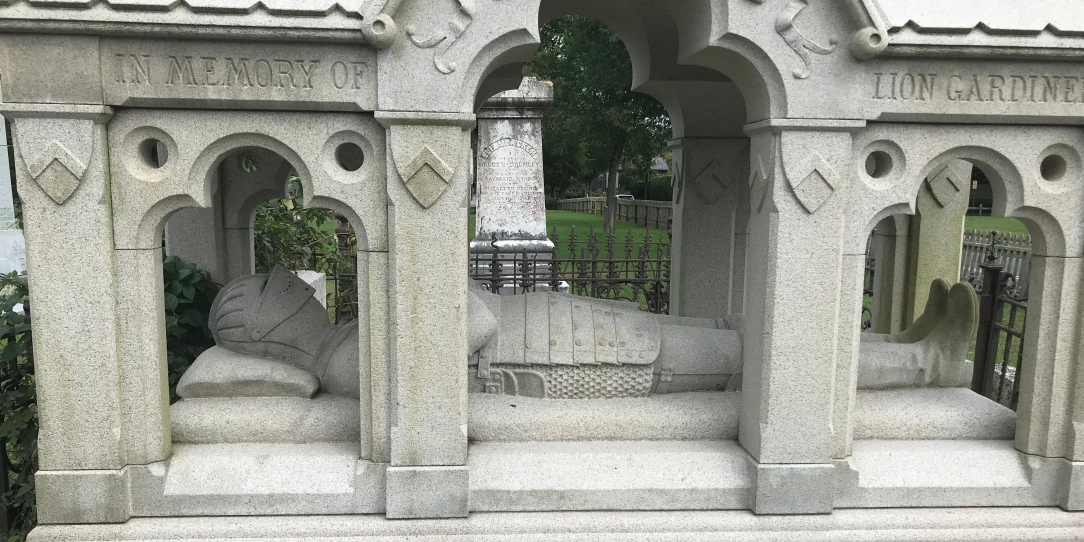 Remembering Our Ancestors: Lion Gardiner, 1st Lord of the Manor

Lion Gardiner was a man of sterling qualities, and acquired the esteem of all with whom he came in contact.  In the autumn of 1886 a recumbent effigy was erected to his memory, and his grave was opened.  In it his skeleton was found to be intact.  It was that of a man over six feet in height, with a broad forehead and strong jaws.  (from: Appletons’ Cyclopedia of American Biography, 1600-1889; Vol II: Crane – Grimshaw, p. 595)

Doesn’t that sound like an ancestor to be proud of?  Lion Gardiner (1599–1663) was our 10th great-grandfather: His grand-daughter Mary, daughter of his daughter Mary and Jeremiah Conkling Sr., married Thomas Mulford, and their line produced our great-grandma Mattie Mulford, wife of Steward Leslie Denney.  The Conklings and Mulfords are formidable first-settler families of Long Island, New York in their own right, but for today, we will concentrate of Lion Gardiner.

And what better time to remember our ancestors who were settlers on this continent rather than an immigrants, with Thanksgiving coming up and our thoughts going back to the brave souls that came here in those early days?

But let’s begin at the beginning.  Much of what you can read below is based on an article titled America’s Aristocrats: Gardiner’s Island, written by Trey Garrison and
published in November 2007, and I added more information, dates and details from numerous other sources all over the internet, among them Find-A-Grave, Ancestry, Wiki-Tree, Rootsweb and a number of books about North American families and early migration, all readily available online.

Lion Gardiner was born on 3 December 1599 in London, Middlesex, England.  It appears as though he had red hair!  He married Marrigje Willemson Deurcant, a lady of Dutch descent, in 1624, and on 11 Aug, 1635, he and  his wife (then still childless), together with a single female servant and eleven other male passengers, embarked at London in a small vessel, the Bachelor, on their three-and-a-half months voyage, reaching Boston on 28 Nov that same year.  Lion had been a decorated military engineer in the English army who had served in the Netherlands with great distinction during the war of liberation against Spain, a war during which, incidentally, the home of Marrigje‘s grandfather at Zalt-Bommel had been confiscated.

According to Appleton’s Cyclopedia of American Biography, Lion was persuaded by Hugh Peters and other Englishmen to enter the service of the company of the Lords Say and Brooks and other gentlemen that was colonizing an American settlement for the Puritans.  After his arrival in the New World, he took command of 300 soldiers and workers, drawing up and executing plans for towns and forts, among them Saybrook Fort, which he named after the Lords Say and Brooks.  Lion’s son David and his daughter Mary were born there in 1636 and 1638 respectively, David being the first white child to be born in what was to become Connecticut.  After Saybrook Fort was completed, the Pequot Indians declared war on their new neighbors.

The clothing you can see in the picture is pretty much what Lion Gardiner eventually was buried in: an English red uniform and metal armor as shown, with a splendid sword by his side.  The sculpture of a reclining knight on his tomb wears armor somewhat like that, apart from helmet.

During the two-year war with the Pequot, Lion commanded Saybrook.  Here is Lion’s own account of the events: Relation of the Pequot Warres (1660).

At the same time, on the eastern half of Long Island, Chief Wyandanch led the Montaukett tribe and watched the war between the English and the Pequot with great interest.  He soon recognized the superior firepower of the English, repudiated his Pequot kin and formed an alliance with the Lion Gardiner.  According to Faren Siminoff’s Crossing the Sound: The Rise of Atlantic American Communities in Seventeenth-Century Eastern Long Island, such a repudiation was fully within the bounds of traditional native culture.  Wyandanch made sure to negotiate the terms of the alliance according to Indian standards, and he insisted on a client-patron relationship rather than complete subordination.

In turn, Lion was offered the island that now bears his name, and he reportedly bought it for a large black dog, some powder and shot, and a few Dutch blankets.  And this is how the Isle of Wight, or Manchonake, as the Indians called it, became Gardiner’s Island, private property of the Gardiner family.

There are thousands of descendants of his this day, many notable ones among the lot, and there are lots of stories to tell about them and Gardiner’s Island, one involving the infamous pirate Captain Kyd, but we only want to relate one story here, one in which Lion himself was still involved:

Lion’s daughter Elizabeth is said to have played a key role in the colonial witch hunts as the accuser in one of the earliest witch trials of the New World, a short version of which we will recount here.  In New England, The Great Migration and The Great Migration Begins, 1620-1635; Great Migration, Vol 3, G-H, p. 12, it says that Lion

“became entangled in the witchcraft case against Elizabeth, the wife of Joshua Garlick.  The Gardiners and the Garlicks had had problems in the past.”

Joshua Garlick had been a worker on the Gardiner’s estate.

In any case, we thought Lion’s involvement in the affair, which actually led to the accused lady being declared not guilty, most noteworthy.

Elizabeth, possibly maiden name Blanchard, was married to Joshua Garlick, a farmer who had once worked for Lion Gardiner, the most prominent citizen of East Hampton, Long Island.  As the “Goodwife” Garlick, Elizabeth, then in her 50’s, was tried, in February, 1658, at East Hampton for witchcraft, but was fortunate enough to escape with her life.  She was charged with bewitching Elizabeth, wife of Arthur Howell and daughter of Lion Gardiner, who had died in a state of hysteria.  The case, including depositions, takes up several pages in the printed records of East Hampton.

The case began on a Friday in early February when 16-year-old Elizabeth Howell became delirious with fever and raved that she saw “a black thing at the bed’s feet,” and cried out, “A witch!  A witch!  Now you are come to torture me because I spoke two or three words against you.  In the morning you will come fawning….”  By Sunday evening, the young woman lay dead and Goody Garlick found herself accused of causing this death by witchcraft.

While the father of Elizabeth Howell, Lion Gardiner himself did not testify, his word carried weight and “it is creditably reported by a local Authority, that Mrs. Garlick had been employed in the Family of Capt. Lyon Gardiner, and that another Woman in the same Employ had accused Mrs. Garlick of causing the Death of her Child; while, according to Capt. Gardiner, the Woman who had been a Witness against Mrs. Garlick, had taken an Indian Child to nurse, and starved her own Child to Death for the Sake of the Pay she was to receive for supporting the Indian Child.”

We will finish this rather lengthy brag with a historic picture of the Gardiner Manor on Gardiner’s Island.  Happy Thanksgiving, everyone!

9 comments on “Remembering Our Ancestors: Lion Gardiner, 1st Lord of the Manor”