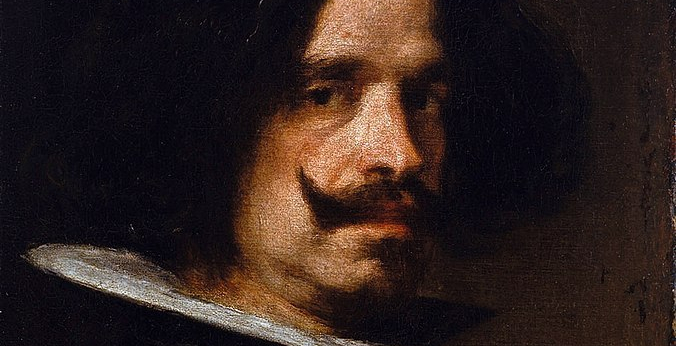 We have been posting portraits lately, and mentioned various Dutch painters.  Today, we will continue one trend but break with the other:  Here is another portrait of a young lady, but the painter is one of the Spanish Golden Age rather than the Dutch:

Diego Rodríguez de Silva y Velázquez (1599 – 1660) was one of the most important painters of the Spanish Golden Age.  Leading artist in the court of King Philip IV, he was an individualistic artist of the contemporary Baroque period, they say.  It does not come as a surprise that Velázquez painted many portraits of the royal family.  The rise of the Spanish Habsburg dynasty did, after all, coincide with the Spanish Golden Age of of arts and literature.

This little cutie pie princess Margaret Theresa of Spain, who lived to bear the titles Holy Roman Empress, German Queen, Queen consort of Hungary and Bohemia, and Archduchess consort of Austria, struck us as quite dignified for her young age:  She must have been around four at the time.  Velázquez painted her portrait at least 5 times between 1653 and 1660, at different ages, and his portraits of her are by far the most favorable, I dare say.

Now, while I am surely no expert on the matter, I find the 17th century Spanish style of painting quite distinct, although it is said that Velázquez’s obvious belief in artistic realism is comparable to many of the Dutch masters.  Considering the bold brush strokes that give his paintings depth, it is easy to understand why Diego Velázquez’s art and style was a model for the realist and impressionist painters of the early 19th century.