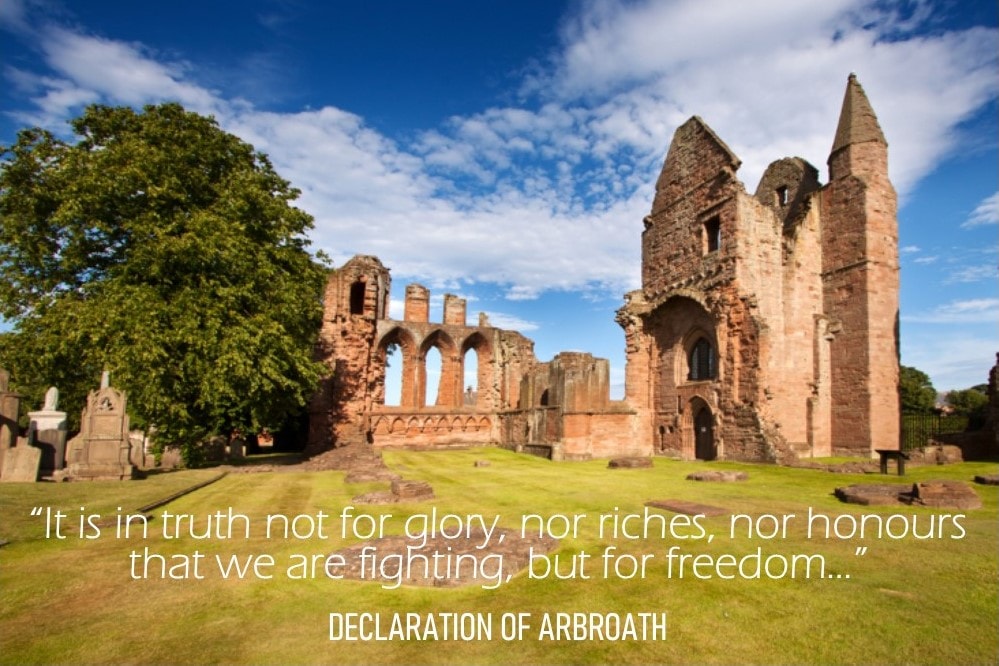 “As long as but a hundred of us remain alive, never will we on any conditions be brought under English rule. It is in truth not for glory, nor riches, nor honours, that we are fighting, but for freedom – for that alone, which no honest man gives up but with life itself”.

By Donald in History, Homeschool, Language on April 6, 2020
No comments

PDF:  Download the transcript and translation of the Declaration of Arbroath  from the National Records of Scotland.

“The Declaration is a letter from the barons and whole community of the kingdom of Scotland to the pope in 1320, asking him to recognise Scotland’s independence and acknowledge Robert the Bruce as the country’s lawful king.

The Declaration was in Latin and was sealed by eight earls and about forty barons. Over the centuries various copies and translations have been made, including a recent microscopic edition.”

The Declaration of Arbroath and Scottish independence

“The Declaration was written during the long war of independence with England which started with Edward l’s attempt to conquer Scotland in 1296. When the deaths of Alexander III and his granddaughter Margaret, Maid of Norway, left Scotland without a monarch, Edward used the invitation to help choose a successor as an excuse to revive English claims of overlordship. When the Scots resisted, he invaded.

Edward refused to allow William Wallace’s victory at Stirling Bridge in 1297 to derail his campaign. In 1306 Robert the Bruce seized the throne and began a long struggle to secure his position against internal and external threat. His success at Bannockburn in 1314, when he defeated an English army under Edward II, was a major achievement but the English still did not recognise Scotland’s independence or Bruce’s position as king.

On the European front, by 1320 Scottish relations with the papacy were in crisis after they defied papal efforts to establish a truce with England. When the pope excommunicated the king and three of his bishops, the Scots sent the Declaration of Arbroath as part of a diplomatic counter-offensive. The original letter, delivered to the pope in Avignon, is lost, but we know it reached him. He wrote to Edward II urging him to make peace, but it was not until 1328 that Scotland’s independence was acknowledged.

The Declaration was probably drawn up by Bernard, Abbot of Arbroath. It was authenticated by seals, as documents at that time were not signed. Only 19 seals now remain of what might have been 50 originally, and many are in poor condition.”