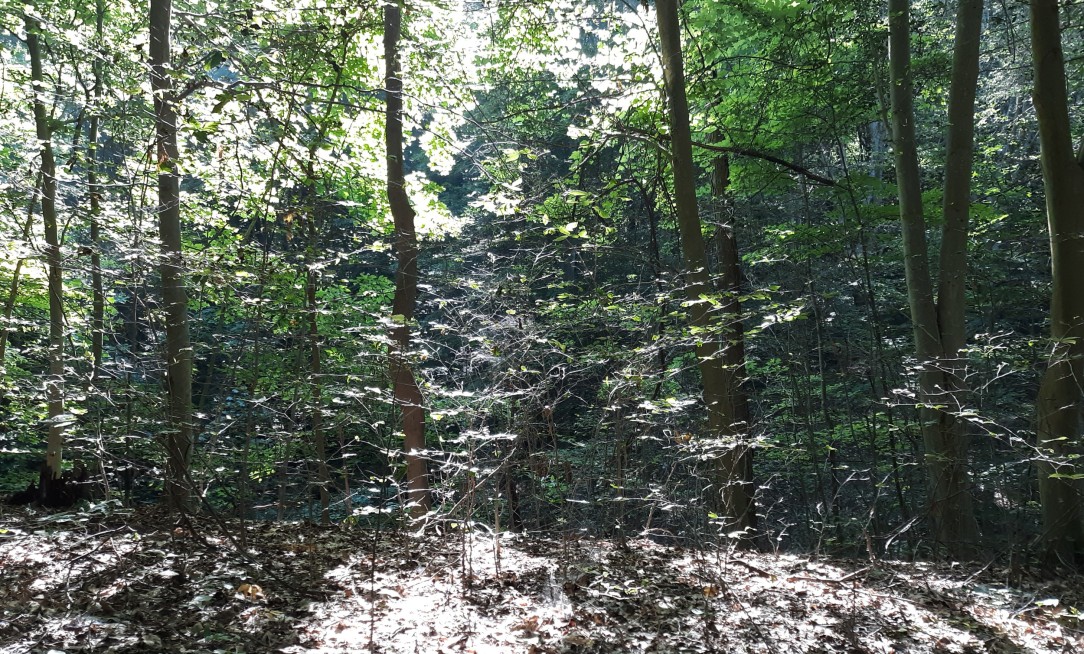 Into the Woods: Beech Leaf Disease

We are nosy people who love nothing better than spying on our neighbors, observing any change, taking pictures, researching and exploring what is going on with them.  Our neighbor’s don’t mind, as far as we know.  Since we live in a clearing in the forest, the only neighbors we have are trees.  To name just a few, there are maples, various oaks, tulip poplars, horn beams, alders, ash trees, various nut and fruit trees, black cherry trees, willows, tupelos and, of course, beeches.  Only there is a problem with the beeches, it seems.

Last year we noticed that many beech leaves looked funny, striped, in fact.  Since it wasn’t just one tree or just in one particular spot in the woods, we looked it up and lo and behold!, other people were aware of the problem as well:  Beech Leaf Disease (BLD), they call it quite fittingly, and apparently, it is somewhat of a mystery disease still.  On an Ohio State University website, the following was stated about BLD as early as August of 2017:

“We know that we don’t know what causes it or that if it is caused by a virus or other pathogen what its vectors might be, if any. We do not know how serious it will become or how much more it will spread from one area to others.

We do know that it is not easy to identify its cause; common suspects are not responsible.”

Almost three years later, at least the range of culprits causing Beach Leaf Disease has been narrowed down a bit, and also where it comes from.  Arborjet.com states the following:

Beech Leaf Disease (BLD) is a new disease of beech trees (Fagus spp.) that has been identified and observed in forest areas in Eastern USA and Canada. The cause of this disease remains to be confirmed, but a nematode species, Litylenchus crenatae n. sp., newly described from Japan on Japanese beech, is suspected to be involved in BLD.

They also give you an idea of the symptoms and timeline of the disease, both of which agree very much with what we have been observing around here:

The leaf canopy has indeed been reduced substantially nearby, with areas that usually do not get sunlight anymore as soon as the leaves are out being now quite light as the header photo shows.  Here is a little video, taken in the same general area.  Note that the small beeches in the front are just about bare and are only in the light because the old trees behind and above them show much reduced foliage.

Looking at the leaves from above, they are now beginning to look quite dried up and feel leathery as well, which means their ability to photosynthesize is significantly hampered.

In some parts of our woods, there are substantial amounts of beeches and if they were to die off within the next years, it surely would change the forest we live in in ways hard to imagine.

If you wish to read more, here is a longer article with more scientific background on arborjet.com:

3 comments on “Into the Woods: Beech Leaf Disease”