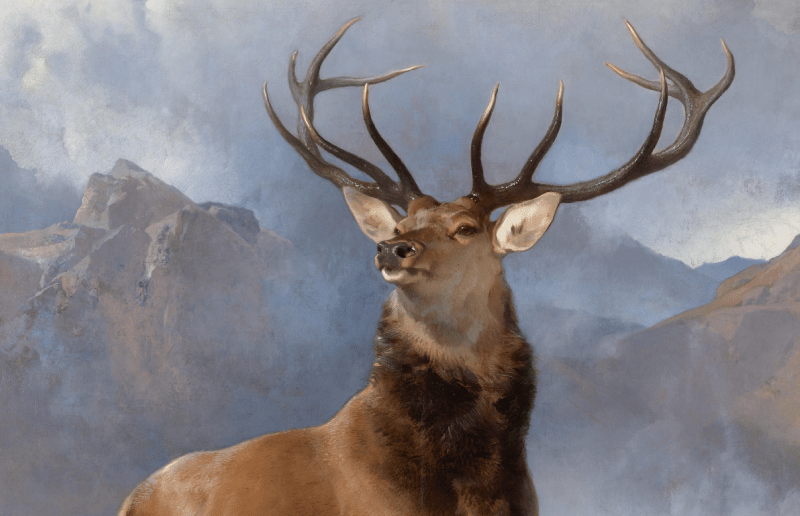 Inspiration can come from just about anywhere, I guess.  Today’s choice of painter was inspired by a feature in our Advent calendar:  They presented paintings from the National Galleries of Scotland, and among them was Sir Landseer’s “The Monarch of the Glen” (1851), one of the most famous British paintings of the 19th century.  We looked for more of his work, and our girls were very much impressed by his paintings of their favorite horses (Arabians, of course) and so many wonderful dogs.  Hopefully, you will enjoy our selection as well.

Sir Edwin Henry Landseer (7 March 1802 – 1 October 1873) was born, lived and died in London, UK.  He was an English painter and sculptor, portraying predominantly animals such as horses and dogs, but also wildlife, as shown above.  Developing his artistic talent very early in life, he is now probably best known for the bronze lion statures at the foot of Nelson’s Column in Trafalgar Square in London.  I firmly believe that every single tourist that ever went to London has a photo of these lions, usually with the tourist in question (and a couple of doves) in the picture as well; the lions’ shiny backs and paws provide ample proof of the innumerable people posing on and clambering around them day in, day out.

Sir Landseer’s paintings of dogs in the service of humanity were very famous and influential in his day already, so much so that the name “Landseer” came to be the official name for a certain variety of Newfoundland dog, a black and white one, to be precise, because it was this variety Sir Landseer popularized in his paintings celebrating Newfoundlands as water rescue dogs, as seen below, for example:

Sir Landseer did not only paint animals outside, but also in domestic settings.  Now follow four examples that are each very different, in atmosphere as well as choice of domestic scene, from the beginning of life through to its end.

Another rural cottage scene.  Warning:  If you are as soft-hearted as I am, you might want to scroll on quickly.

Just in case you are still not impressed enough by Sir Landseer’s talent, or if you need a little cheering up, listen to this curious rumor:
Sir Landseer was reportedly able to paint with both hands, even at the same time!  He could, for example, paint a horse’s head with one hand, and, simultaneously, its tail with the other.  Amazing!

Lastly, the “Monarch of the Glen” in all its majesty: